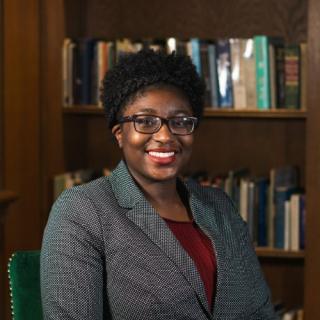 Monik graduated in 2019 as the College’s first Black female student body president. A Geography and African-American Studies double major, she wrote an honors thesis play in African-American Studies titled “The Recording,” which won the Eleanor Frost Playwrighting Competition. She was president of the NAACP at Dartmouth, through which she created and hosted the first ever Black Arts Showcase at the College. She was a first year undergraduate advisor, a two-time recipient of the Social Justice Award, Orientation Team member, DOC first-year trip leader, curatorial fellow for the Hopkins Center, Dartmouth Idol judge and choreographer, dancer and artistic director for Ujima, a part of the Palaeopitus 2019 senior delegation, and proud member of Delta Sigma Theta Sorority. She cofounded D-Step, an open step team, which won third place at a competition at Tufts and was recently invited to perform at Carnegie Hall. Through her leadership, she piloted the Dartmouth Coach and Co-op Voucher programs to service over 400 students by offering assistance with meals and travel back home.

Monik served as the Class Day Speaker for the Class of 2019. She was awarded the Dean’s Prize for her Outstanding Contribution to the College and was a Glamour College Woman of the Year nominee. A passionate arts supporter, she now lives in New York City where she volunteers with kids in the community, has assisted in the development of a Bronx charter school and is currently honing her writing and arts skills.