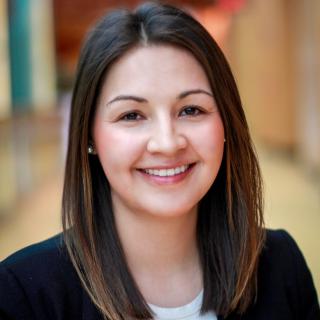 Kalina graduated from Dartmouth with a double major in Native American studies and anthropology modified with linguistics. While at the College, Kalina was the president of Native Americans at Dartmouth, chairperson of Dartmouth’s Annual Powwow, a Stefansson Fellow at the Dickey Center, and a member of Delta Delta Delta Fraternity and the Casque and Gauntlet senior society. In her senior year, she received the Dean’s Plate Award for outstanding contribution to the life of the college and the Class of 1965 Achievement Award in memory of Charles Eastman for her outstanding contributions to the social and cultural life of the Dartmouth Native American community.

After graduation, Kalina worked at Dartmouth for two years; first as a presidential fellow in the President’s Office, and then as the coordinator of the Indian Health Service Partnership at the Dartmouth Center for Health Care Delivery Science. Before pursuing her MBA degree at the University of Michigan’s Ross School of Business, Kalina worked in marketing and communications at Cargill. As an alumna, Kalina has served as an alumni councilor and chair of the Council’s Young Alumni Committee, and has been a member of the Dartmouth Club in all cities in which she has lived. Kalina currently lives in Seattle, WA and is a Product Manager on the Starbucks At-Home Coffee brand.